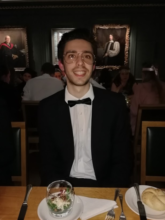 I’m a first-year studying History and French, and I chose Trinity Hall because of its grounds and friendly reputation – I haven’t been disappointed so far!

6am: If I have rowing, I’ll typically get up at this time and make the short (15 min) walk to the Tit Hall boathouse. Although I’m not exactly one for early mornings, being able to speed down a river surrounded by beautiful parks and buildings, as well as the social element, really makes it worth it.

9am: I’m usually done by this point, and I’ll head back to college for breakfast and a quick shower.

10-12am: Lectures. French lectures are normally on literature on linguistics, while history will be on papers I’ve chosen (currently Renaissance Europe and Modern Africa), but can relate to a wide variety of things within these periods.

12-1pm: Lunch-I’ll usually head to the college canteen or, if I’m in a rush, grab a cheeky meal deal (Boots is best)

2-4pm: Language classes. As a languages student, you’ll typically have more contact hours than other humanities students but fewer than the scientists.

4.30-6pm: Relaxation time – I’ll normally head to a friend’s room and have a chat and some biscuits.

6.15pm: Dinner in hall. If I’m looking to treat myself, I might get a takeaway and eat with people on my staircase.

7-8.30pm: There’s always something going on at Cambridge in the evening, whether it’s a talk, play or bar social. If I’m feeling lazy, I’ll catch up on some Netflix.

8.30-11pm: Everyone at Cambridge has their own preferred working hours and mine tend to be during the night. I’ll do a translation, start planning an essay, or make a start on an article I’ve been commissioned to write.

11pm-Late: While I’m not the biggest clubber, I’ll sometimes enjoy a Cambridge night out, with its obligatory ending of cheesy chips from Van of Life (just 2 minutes away – perks of being at a central college!

PHP Code Snippets Powered By : XYZScripts.com
This website stores some user agent data. This data is used to provide more extensive and relevant information on the website. Data collected includes, but is not limited to, whereabouts on the website users view, and from where this has been accessed from. This statement is required in compliance with the European General Data Protection Regulation. For more information contact the webmaster. If you decide to opt-out of any future tracking, a cookie will be set up in your browser to remember this choice for one year. I Agree, Deny
926